Fly was a great teacher and was nothing less than a wise soul in a dogs body.
He taught me a lot in his short life and brought a smile to everyone's face who met him.  Tripp and Fly were the best friends I've ever seen two dogs be!  They were often found "spooning" together and Tripp was always following Fly around as if Fly were his sheep. Fly was struck with intestinal cancer the summer of 2007 and I helped him go to rest in October.  You will be missed more than you could ever know...wait for me buddy and we will walk together again, I promise.

To view Fly's photo album click on his picture below. 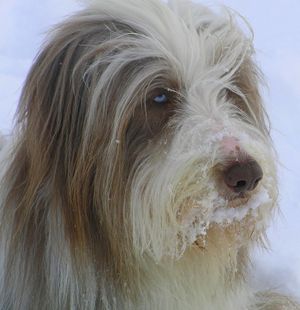